Pachypodium cactipes is a spiny, arborescent, succulent caudiciform plant that resembles a small tree. It is usually single-stemmed and grows to heights of up to two meters (6 ft). The stem of Pachypodium cactipes is cylindrical and usually tapers into a point at the top. Its gray-green color is caused by very dense clusters of tiny leaves on sharp points at the end of its stems.

The Pachypodium Cactipes is a succulent, herbaceous, perennial with stem-like succulent branches and leaves which develop from the base. The leaves are up to 10.8 cm long and 3.2 cm wide with a tapered apex. They appear in opposite pairs along the branch and have smooth edges. Pachypodium may shed its old leaves, but it never sheds its branches.

Pachypodium cactipes is a species of succulent deciduous tree. It has a huge, swollen, carrot-like caudex which often gets up to 1 m long and 20 cm broad. The root-tapering growth pattern might make the plant appear topped with a crown of leaves. Pachypodium cactipes, also known as the Madagascar palm, is a species of succulent flowering plant in the dogbane family, Apocynaceae.

It is endemic to southwestern Madagascar, where it is common in dry forest and deciduous woodland at lower elevations, particularly along the banks of rivers and streams. Its natural habitat is threatened by logging and charcoal production.

The Pachypodium cacti is a tall, single-trunked succulent with a colorful trunk. This very exotic plant needs protection from the cold temperatures in winter and also direct sunlight, which can cause sunspots. The Pachypodium cactipes, also known as the Madagascar Palm Tree or Cactus-Pine is a subspecies of the Pachypodium genus. It grows in a habitat between 4,000 and 6,000 feet above sea level.

Pachypodium Cactipes have a brownish coloration on their older portions, especially during the winter months or due to drought or other environmental factors, rather than at the base of the cliffs like other members of their family.

Pachypodium cactipes are native to Madagascar and typically grow in desert conditions. However, Pachypodium is generally quite adaptable when it comes to lighting and water requirements, so this should not be a problem for most growers. When purchasing new pachypodium cactipes, select plants that have several fleshy roots, which is an indication that the plant is happy. Never purchase Pachypodium cactipes with long lean roots as they are usually unhealthy.

Pachypodium cactipes is a succulent, spiny tree native to Madagascar and the surrounding islands. This should be a standout for any garden that receives some sunlight, and it is interesting to note that it does fairly well in low-light environments. The new leaves are pink or red when growing from the branches, but brown and green once fully matured.

If a gardener wants to see the flower on this plant, they will have to wait until late spring or early summer when the flowers bloom at the end of long stalks. It only takes two or three years before the plant can grow up to 10 feet in height. As far as fertilizing this plant goes, it is best to use a slow-release fertilizer so that it can be distributed over several months for sustainability purposes.

The pachypodium cactipes is a succulent tree native to the Madagascar rainforest. They are slow growing but can reach impressive heights of 30 feet (9 m). Looking at them you would never believe they were in the same family as prickly pear and yucca plants. They are covered in sharp spines along their leaves and trunk. They tend to have a life span of about a decade, but some reports state that they live up to 50 years old.

They make great houseplants because they thrive on neglect, and their hardiness makes them a likely candidate for cold hardy areas. They like bright indirect light and warm temperatures of about 70 degrees F (21 degrees C), so you should give it plenty of light and water during spring/summer and then allow its soil to almost dry out before watering again in late fall/winter months.

Be the first to review “Pachypodium Cactipes Beauty” Cancel reply 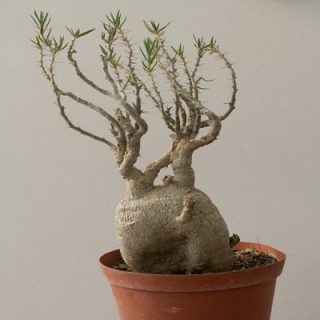 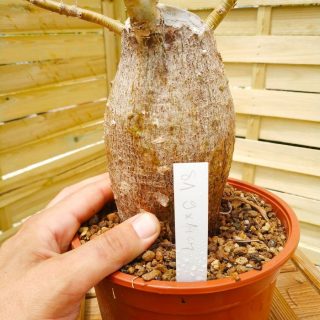 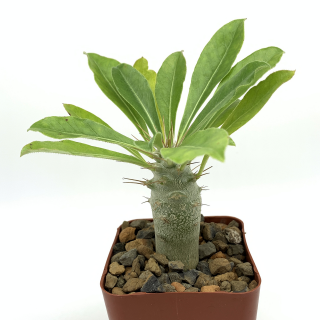 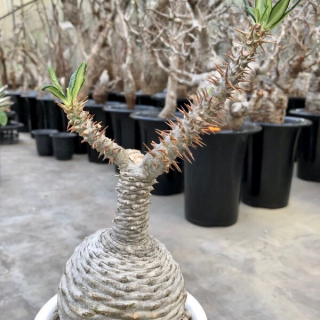 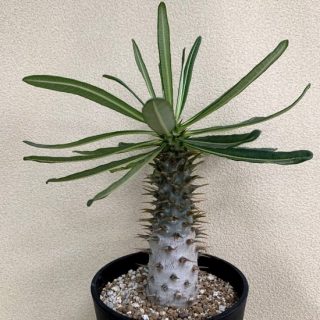 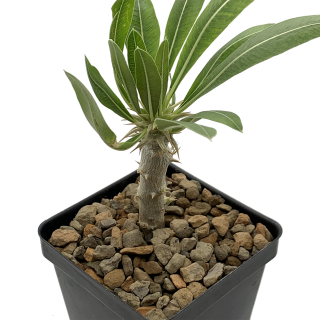 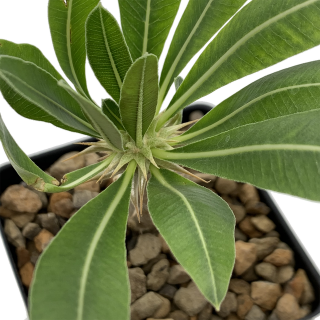